Disney/Pixar Brave ($44.99)
In Disney/Pixar Brave: The Video Game, challenge destiny and change your fate! Play as Merida, a Will ‘o the Wisp, and other popular characters, from new Disney/Pixar film, as you run, jump and battle your way through the rugged landscape of mythical Scotland. Help end of a magical blight that has befallen the land while you combat enemies, solve challenging puzzles and obstacles in order to bring peace and unity back to Scotland.
ESRB: E10+
File Size: 3 GB

Spec Ops: The Line ($59.99)
It’s been 6 months since Dubai was wiped off the map by a cataclysmic sandstorm. Thousands of lives were lost, including those of American soldiers sent to evacuate the city. Today, the city lies buried under sand, the world’s most opulent ruin.
ESRB: M
File Size: 5.46 GB

Sonic Generations ($29.99)
Sonic’s universe is thrown into chaos when a mysterious new power comes into force, creating ‘time holes’ which take Sonic and his friends back in time. Revisit some of the most iconic environments of the past 20 years, playing as Classic Sonic in re-imagined 2D side scrolling levels, and as Modern Sonic in all new, stunning 3D levels. Will they find out who is behind this diabolical deed?
ESRB: E
File Size: 8.5 GB

The Adventures Of Tintin : The Game ($39.99)
In the Adventures of TinTin, players will experience non-stop action as they investigate the mystery of a lifetime that may lead them to one of the greatest sunken treasures. But the quest won’t be easy and players will need to join forces with the quick-witted dog Snowy and the grumpy Captain Haddock to beat greedy art collectors, kooky arms dealers, and other crooks to reveal the truth behind the Secret of the Unicorn ship.
ESRB: E10+
File Size: 7.06 GB

BELLATOR MMA ONSLAUGHT (Demo Also Available) ($14.99)
Nominated for ‘Best Sports Game’ and ‘Best Fighting Game’ at E3 by Neoseeker. Based on Bellator Fighting Championships, it is a first of its kind, a fast paced arcade style MMA fighting game with easy to understand controls that enable players to quickly master the clinch and ground game. Design your own fighter and compete against other players’ creations and the best Bellator fighters to level your fighter and master MMA techniques.
ESRB: T
File Size: 2.77 GB

Dungeon Twister ($6.99)
Two teams of adventurers with supernatural powers are locked up in the same dungeon. Only one team can walk out. Will it be yours? Choose to flee or to fight. Make the dungeon’s rooms rotate to help you advance… or prevent your opponent’s progress. Play alone or confront other players on PlayStation Network in this turn-based strategy game.
ESRB: T
File Size: 156 MB

Bloodrayne 2 ($9.99)
The Cult of Kagan has unleashed horrors upon the world in their pursuit of supremacy. Only Rayne can take them down.
ESRB: M
File Size: 4.4 GB

Download the critically-acclaimed third person shooter Spec Ops: The Line from the PlayStation Store this week and jump into a provocative and gripping game designed to challenge players’ morality by putting them in the middle of unspeakable situations where unimaginable choices must be made. Set in a war-ravaged Dubai, you’ll use the tactical squad-based Delta Force gameplay throughout a horizontally and vertically-oriented world, complete with devastating sandstorms that have serious impact on combat.

In addition to Spec Ops: The Line, be sure to download other great PS3 Full Games this week including Sonic Generations, Tiger Woods PGA Tour 13, and Disney/Pixar’s Brave.

Visit the PSN Summer Sale website to get all the details on this amazing sale.

The PSN Summer Sale kicks off today as well! featuring amazing titles at stellar discounts. This week-long sale runs from now until July9th and delivers class games like Shadow of the Colossus, inFAMOUS: Festival of Blood, Killzone 3 Multiplayerat great discounts to all PlayStation gamers, with Plus members receiving an even greater discount at 50% (or more) off all titles!

Tape up in a fight for the title with Bellator: MMA Onslaught! “Title shots are earned, not given” in this hard-hitting game which squares players off toe-to-toe with some of the world’s top fighters as they compete in authentic Bellator events. Download your copy today from the PlayStation Store.

Dungeon Twister is a turn-based strategy game that some describe as a mix between chess and Dungeons & Dragons. This hit board-game is making its digital debut today in the PlayStation Store . Check out the Dungeon Twister dedicated post to learn more about the game’s tactical, and fun, multiplayer.

Today’s PlayStation Plus update today brings 3 new games to every member’s Instant Game Collection! Beginning today, you’re able to download Gotham City Impostors, Pac-Man Championship Edition DX, and Renegade Ops FREE with your membership. There are also the fantastic discounts you get with the PSN Summer Sale, new Full Game Trials to check out, and some exclusive avatars to purchase. Check out this week’s dedicated Plus post for more! And if you’re not a member yet, there’s never been a better time to join. Click here to purchase online, or activate on the PlayStation Store.

Here is the rest of the PlayStation Store update: 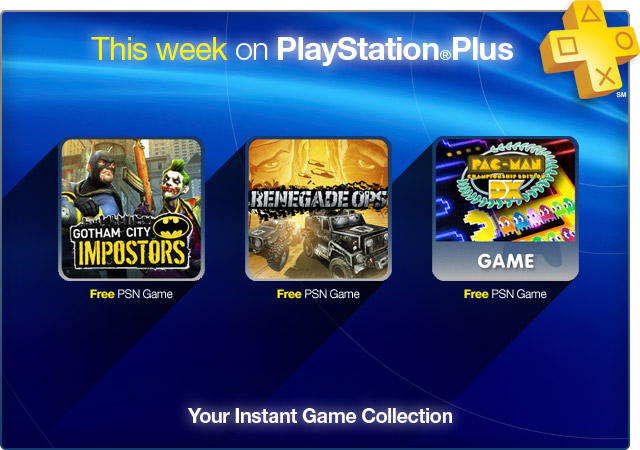 Summer Stars 2012 Demo
Take on your friends or play on your own in a huge variety of summer sports & special challenges to see if you have what it takes to bring home the gold this summer!
ESRB: E

NCAA FOOTBALL 13 ($59.99)
Take your team to victory with a former Heisman Trophy winner on your team with NCAA Football 13. With one of 10 former Heisman winners on your roster, see if you have the confidence and poise to utilize his legendary skill set to once again capture the Heisman Trophy—this time for your school.

Dragon’s Dogma: A Face Of A Different Color
Change your attitude with seven new color variations and six new voice types, and receive the Nameless Armor as a bonus.

Dragon’s Dogma: From A Different Sky – Part 7
The seventh of the ‘From a Different Sky’ series, you’ll need your wits to clear all 10. Check the Pawn Guild to begin!

Max Payne 3 Cemetery Map
With a wintry New York City skyline, sniping positions amongst the monuments, circular fighting arenas in a rotunda garden and a looming mausoleum, the Cemetery Multiplayer Map makes a fitting final home for your enemies.

Record Of Agarest War 2 Overtake Your Rival Pack 1
With the fine items listed below, you should be able to progress through your journey with ease.
STR Up x2, Vit Up x2, INT Up x2, MND Up x2, AGI Up x2, DEX Up x2, Max HP Up x2.

Record Of Agarest War 2 Right To The Blacksmith Pack 2
For those you lack the fortitude required to Convert items, or if you simply lack the time, fear not! Take these items and make your way to Warrior Soul with all due haste! Silver Ore x10, Platinum Ore x10, Bauxite x5, Trogtalite x5, Magnetite x5, Dolomite x5, Pileroth x5.

Saints Row: The Third – Genki Girl Pack
Drive in Genki Girl style with this assortment of vehicles. Sad Panda sports a dune buggy, Angry Tiger has her motorcycle, and Sexy Kitten drives a special sports car. Each of these rides is themed after the girls themselves, and pack a deadly surprise!

Hustle Kings Crazy Table Pack: Hex Crazy
Compatible with PlayStation Vita system only. Download this pack and shoot your way to the Hustle Kings Hex Bar for an additional pool table that’ll make even the coolest hustler break into a sweat. To use this download, you will need the Hustle Kings game.