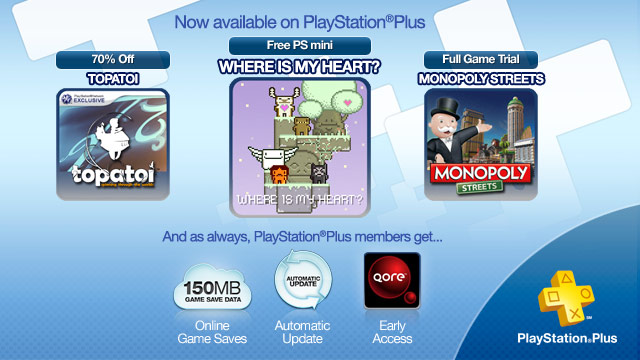 Don’t have PlayStation Plus? Click here to purchase your subscription today!

Fight Night Champion ($4.99)
EA SPORTS brings you their first story-based game mode inspired by classic boxing movies. Step in the shoes of up-and-coming middleweight contender Andre Bishop and experience the trials and tribulations of working your way to the top of the boxing world battling inside and outside the ring.
ESRB rated M
File size 5.38 GB

Dead Space 2 ($29.99)
After waking from a coma on a massive space city known as “The Sprawl”, the lone survivor of a horrific alien infection finds himself confronting a catastrophic new nightmare. Battling dementia, hunted by the government, and haunted by visions of his dead girlfriend.
ESRB rated M
File size 11 GB

Monopoly Streets ($29.99)
The world of MONOPOLY comes to life through a living, breathing city that you can build, own, and monopolize. MONOPOLY Streets has everything you love about the board game, presented as a street level tour of Mr. MONOPOLY’s fully animated world.
ESRB rated E
File size 708 MB

Ratchet & Clank: All 4 One Demo
Team up with your friends offline or online and experience a demo of one of the galaxy’s most anticipated games for this fall – Ratchet & Clank: All 4 One! With online and offline drop-in, drop-out, you’re free to play with whoever you want as you experience this humorous and action-packed adventure! In Stores 10.18.11
ESRB rated E10+
File size 2.13 GB

LittleBigPlanet 2 Oddworld Stranger costume ($1.99)
The best thing about Sackboy is that you can make him look and act exactly how you want. Download this additional costume to really stand out from the crowd! To download this costume, you must already own LittleBigPlanet 2.
File size 110 KB

Motogp 10/11 2011 Season Update (free)
The free MotoGP 10/11 GP class season content update brings you all the riders, tracks and teams for the 2011 season. Ride as the new world number 1 Jorge Lorenzo or the Italian dream team of Valentino Rossi on the Ducati.
File size 779 MB

Red Faction Armageddon: Ruin Pack ($4.99)
Red Faction: Armageddon’s Ruin Mode is all about one thing: destruction. In “Free Play” you’ll wreak havoc on a variety of maps with unlimited time and ammo. “Challenge” is a race against the clock to do as much damage as possible. Break the high score to unlock new maps. Afterwards, flaunt your catastrophic conquests on the Leaderboards by comparing your ranking with friends or players worldwide!
File size 2.52 MB

WWE ’12 – Fan Axxess ($11.99)
Fan Axxess is premium content for the ultimate WWE fan. With its purchase you get the All Unlockables and WWE Superstar Attribute Customizer. Fan Axxess is also a discounted pre-payment for all future WWE’ 12 downloadable content. Please note: This purchase does not include Online Axxess, The Miz’s Awesome Attires, or WWE Superstar The Rock Visit wwe.thq.com for more details.
File size 4.37 MB

WWE ’12 – Online Axxess ($9.99)
Online Axxess is available with redemption of a single-use access code found on the back of the game manual included with original retail purchase. If the Online Axxess code has already been redeemed by a previous owner, you can purchase Online Axxess or begin a free limited trial. Online Axxess includes Online multiplayer and WWE Community Creations. Visit wwe.thq.com for more details.
File size 4.37 MB

Chrono Cross ($9.99)
The amazing sequel to CHRONO TIRGGER! Join Serge as he struggles to uncover the secrets of his past and find the mysterious Frozen Flame in this critically-acclaimed, timeless RPG.
ESRB rated E
File size 778 MB

Full Spectrum Warrior ($9.99)
Dive into a game based on a real-world training aid and learn how to command two fireteams in strategic combat!
ESRB rated M
File size 2.75 GB

Cars 2: The Video Game Full Game ($29.99)
Inspired by Disney/Pixar’s animated film, Cars 2: The Video Game lets you rev up your engine and race around the globe with Lightning McQueen and friends. Train at the C.H.R.O.M.E. spy academy and become a special agent, tackling dangerous missions from London to Tokyo and beyond!
ESRB rated E10+
File size 424 MB

Patapon 3 Perfect March Challenge
The world of the Patapons expands with the first in a series of downloadable missions offering new challenges and tasks! Enjoy this new mission and discover new treasures with this beatastic new level for Patapon 3 and begin your extended adventure today! Please note: Full game is required to play. The World Map is required for this and upcoming downloadable missions for Patapon 3.
ESRB rated E
File size 902 KB