War of the Monsters ($9.99)
Topple buildings and terrorize civilians as a giant creature wreaking havoc. Defeat rival monsters to be the strongest in the world.
ESRB: T
File Size: 1.2 GB

Growlanser: Wayfarer of Time ($29.99)
Unravel the mystery in this legendary RPG from ATLUS!
Join the enigmatic Crevanille on his journey through Noyeval as he tries to discover why mankind is being targeted for destruction. What power do the mysterious Angels possess? Who holds the key to preventing another tragedy? And how will your choices affect the outcome of world-shaking events? Discover the answers to these questions and more as you experience the legend of Growlanser!
ESRB: T
File Size: 919 MB

This week, make sure to check out the first game to release in this year’s PSN PLAY promotion! The Expendables 2 is a co-op arcade-style shoot ‘em up, and takes place just before the events of the upcoming movie of the same name, so make sure to play it before you catch it in theaters. Up to four players can join up to take part in an action-packed rescue mission spanning a number of exotic locales. It’s 20% off for PlayStation Plus members as well.

PSN PLAY is also offering up Sound Shapes this week for pre-order. It’s also 20% of for PlayStation Plus members, and pre-ordering nets you an exclusive static theme for your PS3.

We’re also seeing the release of a great PS2 Classic in the cult favorite War of the Monsters. If you missed this one the first time around, be sure to check it out.

Anime fans across the nation will be excited to see the new Video Services app Crucnhyroll debut as well! In addition, you’ll also get access to the best in Japanese drama, with new content coming online all the time.

Make sure to check out great Add-Ons for new release Risen 2: Dark Waters, and also adorable new Disney princess costumes for Little Big Planet 2! The rest of this week’s update is below; check it out and let us know your thoughts in the comments. 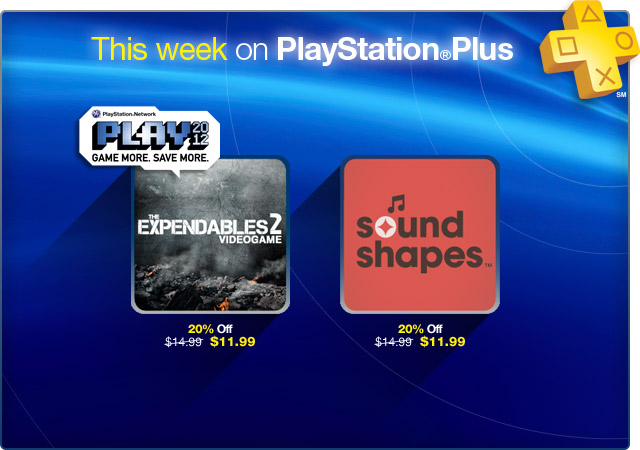 Click here to learn more and purchase online or go to the PlayStation Store to activate instantly.

Scouting Report ($0.99) – Gain the competitive advantage by increasing your insights into your opponents stats before every online match begins with the Scouting Report!

A Pirate’s Clothes ($2.99) – A set of stylish items for the player including a hat, boots, trousers, a pistol and a special ring which increases the rate the player accumulates experience by 5%.
Risen 2 Dark Waters – Treasure Isle ($9.99) – Journey to an unknown island in a story quest that offers new environments to explore with many puzzles to solve, treasures to loot and mysteries to unravel.
Risen 2 Dark Waters – Air Temple ($9.99) – Uncover the mysteries of the Air Temple in this exclusive story quest line. Explore an additional island with new characters, quests and enemies.

FUBAR Pack ($3.99) – Get immediate access to the Officer Class and AK47 weapon for multiplayer, as well as the FUBAR Pack of exclusive character accessories for each class. The Officer Class assists your teammates by giving you gameplay bonuses including the ability to create ammo drops, increased firepower, and increased armor.

Underground Pack ($1.99) – Free from the Asylum and delivered fresh from crazy town, Lil and Laarg discover an underground railway. Could this be their ticket home? Pick up this treacherous new DLC pack to discover an entirely new labyrinth of 19 puzzles and death traps, but beware—Bakuki will stop at nothing to prevent your escape! The Underground Pack also delivers even more Challenge Modes, four new costumes, and four additional Trophies. Download it today! To use this download, you will need the Escape Plan Full Game.

Available In-Game Only (Not on PlayStation Store)