NBA 2K13 was a monstrous release for the world’s 1 NBA video game franchise, with more than 38 Sports Game of the Year and ‘Best Of’ mentions. NBA 2K14 will raise the bar yet again, providing the best basketball gaming experience for legions of sports fans and gamers around the world.

rain is the enchanting tale of a boy who embarks on a journey to save an invisible girl from ghostly creatures. Upon entering the world he discovers that he has also become invisible and must learn to navigate through the unknown, using the rain to guide and protect him.

20 years after the original game’s launch, Conrad is enlisted back to active service for the triumphant return of one of the most acclaimed franchises in gaming history. It is Flashback re-imagined. The original Core-Team revamped their own creation, leveraging the best of today’s technology while remaining true to the classic side-scroller that set the standards of the genre in the 90’s.

Play out your virtual career on a host of unique tables using your own formations and tactics – from hit-and-hope hoofing and tiki-taka total football, to bamboozling trick shots and unstoppable power drives.

Skydive: Proximity Flight is a unique flying sim that puts you inside the suit for an amazing – and totally safe – extreme skydiving experience. With actual wingsuit flying, the suit restricts your motion, and the terrain can threaten your safety. In Skydive you can feel absolutely free. Learn mid-air tricks that only professional skydivers can perform, or make your own tricks alone or with friends. Lose yourself in this exciting airborne adventure with realistic graphics and sounds, and stunning aerial landscapes. Best of all: enjoy the intense adrenaline rush of wingsuit flying without putting yourself in any real danger!

Atelier Meruru Plus: The Apprentice of Arland($39.99)

Atelier Meruru arrives on PlayStation Vita system with additional elements! Includes maps, characters etc which were available as downloadable content on the PlayStation 3 system, plus all new content! Explore Arland from a new perspective – anywhere, anytime!

Deep within the body malicious microbes hatch a plot on how to best disrupt the workings of the immune system. Using your PlayStation Vita system you can now travel deep within the human body. The journey will take you through the circulatory system, through the intestines, and to the nervous system. It will require of you not only efficiency, but also the ability to devise suitable tactics.

Rei is haunted by the Manor of Sleep in her nightmares. When a cursed mark appears on her body, Rei sets out to uncover the secrets of the spirit manor.

The ultimate all included edition of the game. This is a bargain-priced all-in-one set that contains the complete game and all the add-ons. Everything PAC-MAN Championship Edition DX+ has to offer is included! This includes the following Add-ons: Dig Dug Skin, Rally-X Skin, Pac is Back Skin, Big Eater Course, Mountain Course, Championship III and Highway II Courses, Pac Steps BGM, Reentrance BGM.

Get both games now! Spin the wheel along with Pat Sajak and Vanna White on the virtual version of America’s Game! Join Alex Trebek and play as a contestant on ‘America’s Favorite Quiz Show!” Test your knowledge to make it to Final Jeopardy! and the coveted Winner’s Circle!

If you’re a PS Plus member, head over to the store and download Kingdoms of Amalur: Reckoning for free. There are also some discounts for non-members and members alike with the Nordic sale, which includes titles like Darksiders II, MX vs. ATV and Red Faction: Armageddon. 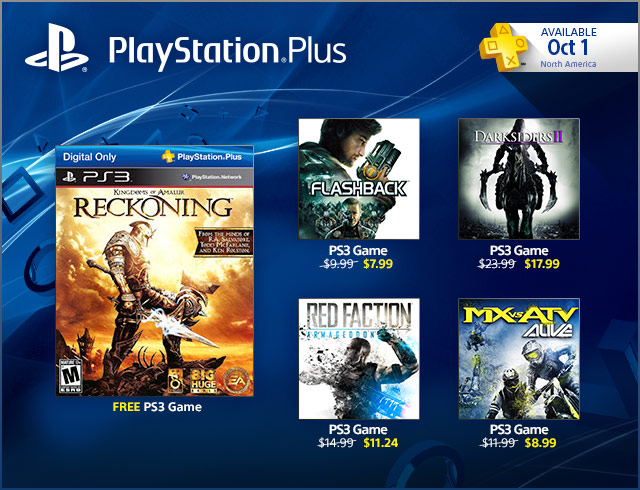 Become a PlayStation Plus member

Take a glimpse into the extraordinary life of Jodie Holmes – a woman who possesses paranormal powers that she does not understand.

20 years after the original game’s launch, Conrad is enlisted back to active service for the triumphant return of one of the most acclaimed franchises in gaming history. It is Flashback re-imagined. The original Core-Team revamped their own creation, leveraging the best of today’s technology while remaining true to the classic side-scroller that set the standards of the genre in the 90’s.

NHL GameCenter is back on PlayStation for the 2013-2014 season. Get ready for the excitement of live NHL games along with up to date scores, stats, standings and highlights. NHL GameCenter LIVE subscribers can watch out-of-market games throughout the regular season, as well as access full-length replays and over 800 classic games.

Atelier Meruru Plus: The Apprentice of Arland

Injustice: Gods Among Us